Site manager and tenant strike up an unlikely friendship

89-year-old tenant Bev has struck up an unlikely friendship with the site manager of our recently opened housing development in Naenae, Wellington.

Local MP, Minister Hipkins along with iwi, community and other partners officially opened the 12 new homes, and a new street to service these homes, at a dawn blessing on 13 July.

The new warm, dry and healthy homes replace the four homes previously on the Kāinga Ora site. Construction of the 12 homes in Raumanuka Road began in April 2019 and was completed in June this year. 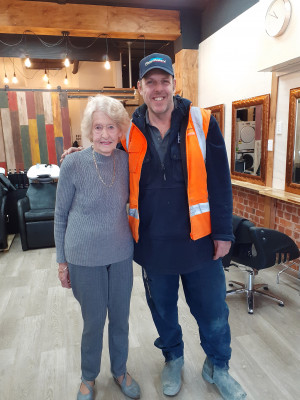 Our tenant Bev has lived at a Kāinga Ora property near the new development for almost 23 years.

Steve, Site Manager for our build partner Trademark Construction, first met with Bev at the beginning of the project, about the installation of a boundary fence to go in as part of work on the development.

Steve has regularly updated the neighbours who live around the development about construction progress and anything that may impact them. And as part of this, he’s popped in to have a cup of tea with Bev once a week.

“She’s a lovely lady and she’s got some great stories,” Steve says.

“Bev has also kept the place in immaculate condition and looks after it like it’s her own.”

Senior Stakeholder Relationship Manager Renée says the project has really benefited from having good relationships with the community, and it was nice to see the bond between Bev and Steve.

“Bev has many stories to tell but what was really lovely to see is the bond she has with Steve,” Renée says.

“They’re really good friends, and he’ll be staying in touch with her after the site is completed later this year.”

Steve has even promised to take Bev to the hairdressers for her 10.45am appointment every Friday for the next few months.

Kāinga Ora Project Manager Tim agrees our build partner has been excellent in maintaining positive relationships with stakeholders in the community.

“Steve and his company have gone well beyond what we’d expect in terms of engagement, respect and doing the right thing by our customers,” Tim says.

“It’s because we’ve got these really good relationships, we’ve been able to sort out issues without any fuss. It makes it a lot easier for us to do our job.”

Since the official opening of the homes last week, half have already been tenanted. A further 25 homes will be delivered as part of stage two of the development later this year.

Find out more information on the Naenae development.