Cadness Road resident John is quick to share his thoughts when asked about his new Kāinga Ora apartment in the Auckland suburb of Northcote.

John moved into his brand new one-bedroom home in February after spending the previous 19 years in an older social housing unit on Greenslade Crescent. 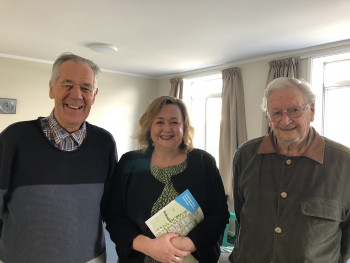 “My new home really suits my needs. The open plan design makes it easy to move around, and the thermal curtains and double glazing help keep me warm.”

Located just across the road from a park, John says his new home is within walking distance of a supermarket and public transport options.

He also gets to see a familiar face every day – his 87-year-old friend, Les, also lives in the same apartment complex.

“Les used to live on Greenslade Crescent as well, so we’ve known each other for years. It’s great to have the young fella around.”

Les says he’s happy in his new home, and describes Kāinga Ora as “a wonderful organisation”.

“I was very pleased to find John living next to me.”

Built by Miles Construction, the Cadness Road development was completed in January of this year, and consists of three three-level buildings and one two-level building.

The 16 one-bedroom units were built with Cross Laminated Timber panels that were manufactured off site, allowing a 30% reduction in construction time when compared to traditional timber, concrete or steel methods.

The site works and development were completed in just 12 months, replacing two units that were previously on the site.