A group of West Auckland students have come out of school with building trade qualifications – and have the houses to prove it.

More than 30 Massey High School students have earned trade skill qualifications while building new state homes in the first full year of a partnership with Kāinga Ora – Homes and Communities.

Among the students is 18-year-old Klay, who says the academy has helped him grow in confidence.

“It’s really rewarding to build new houses for people in need. When I leave the academy I would like to start an apprenticeship, maybe start a company, then someday hire my own apprentices.” 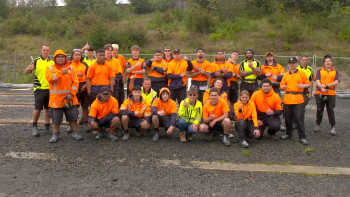 Launched in 2012, the academy provides a pathway for young people to enter the trades, while working under the supervision of registered builders and teachers. The homes are built on the Massey High School campus, then transported to areas in need of housing.

For 17-year-old Re’al, the academy has given her the opportunity to forge an exciting career.

“In the future, I want to move to the land that my family owns and build a house.”

“For the soul, for the wairua, for the spirt of our kids, it’s immense.”

All students in the academy achieved NCEA level 2 or 3, depending on their school year. The pupils also earned level 2 or 3 Building, Construction and Allied Trades Skills certificates.