The blessing was attended by partners Ngāti Toa, Porirua City Council and Kāinga Ora, along with key stakeholders. 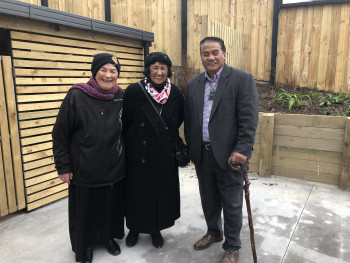 Porirua Development Project Director Will Pennington says this event was smaller than our 31 July events for the completed Castor Crescent homes, as we planned this under COVID-19 restrictions.

“Instead we’ve created a virtual open home, so the community can take a look around that way,” he says. You can take a tour of the Champion Street homes by watching the video below.

“Kāinga Ora – Homes and Communities tenancy liaison officers have been working closely with new tenants over the development and everyone who has seen them has been keen to move in as soon as they can,” says Mr Pennington.

“These 14 new homes are the second lot of homes completed this year in Cannons Creek, following the completion of 10 new homes in Castor Crescent in July.

While COVID-19 has caused some delays in building work, contractors have worked hard to make up time, where possible.