The Porirua Development is more than just upgrading and creating news homes in eastern Porirua; it’s about ensuring the infrastructure and community amenities can support future generations.

On Tuesday 13 July at Te Awarua-o-te-Porirua Harbour, as part of the Government’s commitment to the Porirua Development, Minister Woods, alongside strategic partner’s Ngāti Toa and Porirua City Council announced the Government will be allocating $136 million of the Housing Acceleration Fund to the Porirua Development. This funding will enable the construction of a new reservoir, wetland, and a new 3km sewage pipe through Bothamley Park.

“Following community engagement in 2019, one of the biggest issues facing eastern Porirua residents was poor infrastructure leading to flooding and leakages” says Will Pennington, Porirua Development Project Director. “The announcement today is one step towards protecting not only the local environment and waterways but also enabling new homes to be built in eastern Porirua”. 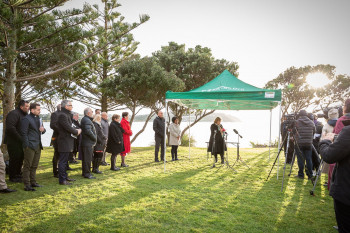 The investment in this crucial infrastructure will improve the resilience and capacity of the water supply network for around 19,000 existing residents in eastern Porirua and prevent flooding through the creation of a wetland in Cannons Creek. Funding will also be used to address land remediation and development work around Cannons Creek which, together with the water infrastructure, will provide additional capacity for another 2,000 homes on private and Government-owned land.

“We’re addressing decades of under-investment”, Woods says. “We and the community need to be honest about this - you can’t build new housing above crumbling old pipes. That would just push infrastructure problems onto future generations when we need to be providing warm, dry, healthy homes in vibrant communities.”

This funding announcement is the first of many instalments of funding to come. Further decisions on funding priorities for Eastern Porirua will follow business case work by Kāinga Ora this year.