A whakawātea (cleansing) has recently been held in advance of civil works starting in early August.

The event was particularly significant because the Avondale development is one of our largest and most ambitious. The site, which is located between Great North Road and Community Lane, will include 236 homes across 6 to 8 levels.

As part of the whakawātea, the mauri (life force) represented by the whenua (land) was removed from below a mature pōhutukawa tree which is being retained as part of the development. 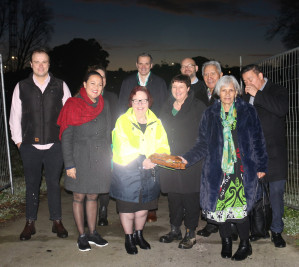 The whenua will be returned to the same spot, and the mauri restored, when the apartment complex is complete.

Highbury Triangle will be made up of five apartment blocks of between 6 and 8 levels and will target a New Zealand Green Building Council 7 Homestar rating, meaning it will exceed Building Code standards for warmth, dryness and health.

It will predominately provide public housing for older customers andthese apartments will meet our Universal Design standards. Alongside this, one building fronting Great North Road will provide homes for individuals and small families of all ages, as well as commercial space.

As well as shared gardens and exercise areas, the development will contain a large community room with an open plan kitchen, an arts and crafts room and private meeting rooms. There will also be smaller community spaces within other apartment blocks.

Highbury Triangle is expected to be completed in stages from late-2023 to mid-2024.

Read more about the development