A Kāinga Ora project has shown how deconstruction not only creates more sustainable results than demolition, but can also be a catalyst for positive social outcomes.

Highbury Triangle in Auckland’s Avondale is the site of the second public housing deconstruction project undertaken as part of a pilot programme. Deconstruction seeks to reuse and recycle as many construction materials as possible which may otherwise go to landfill.

Kāinga Ora adopted a target to divert 80% of materials from  old homes from landfill across its large scale development projects several years ago. This target was recently extended to include small to medium sized public housing developments in Auckland. Diversion targets will follow in other regions soon. 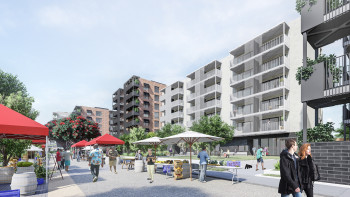 The 236 homes planned for Highbury Triangle will predominately be made up of a state housing complex for older people, alongside a component of market homes and commercial space.

In total, 90% of materials at Highbury Triangle were recycled or reused by deconstruction company TROW Group. The approximately 1,337 tonnes of removed materials included about 947 tonnes of concrete, as well as 141 tonnes of general rubbish, 186 tonnes of wood, 27 tonnes of metal, 22 tonnes of green waste and 13 tonnes of materials which were reused.

A total of 8,956 hours of labour went into the deconstruction and site reinstatement and at one point there were 44 workers on site. The project was completed two weeks early and costs were comparable to traditional demolition techniques.

Saia Latu, who is the General Manager of TROW Group, says that by salvaging materials the company aims to assist with community development.

At Highbury Triangle, this included employing three Avondale locals and sending four shipping containers full of reusable materials to Tonga. These materials were either sold locally or donated to help rebuild schools, churches and houses in cyclone prone areas.

Some of the timber was also reused for the P.O.P Up 828 Maketi (market) held over the duration of the Highbury deconstruction at a nearby Kāinga Ora site on Elm Street. TROW Group offered market stalls to local businesses and services at no cost. The aim was to connect, promote and celebrate Pasifika and Māori businesses while encouraging sustainability and entrepreneurship.

Programme Director Nick Howcroft says the results of the Highbury deconstruction exceeded expectations. “While the initial driver of the pilot programme was about environmental sustainability, the social outcomes were huge value adds.”

“It’s about changing the way we as an industry think about demolition and other site clearance methods.

“If we consider sustainability as one of the key drivers in property development, we’re going to build better communities and cities.

“We need to ensure our homes are not only robust and sustainable in how they are built, but also in terms of how they are lived in and how we will take them down one day,” Nick says.

The deconstruction pilot programme sits under the Kāinga Ora Environment Strategy which includes a range of initiatives aimed at reducing the impact of our operations on the environment and improving sustainability outcomes.

Read about our first deconstruction project.