Breathing new life into a ‘star’ of social housing history

A slice of social housing history has been retained with the opening of newly-refurbished apartments in Dunedin.

Having lived in his home nearly 25 years, it makes sense that Peter was anxious when he found out he would have to move. 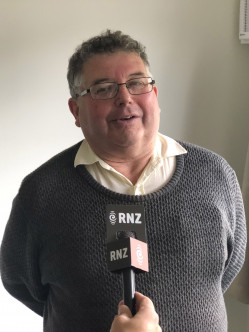 Kāinga Ora tenant Peter is looking forward to moving to his new home.

As a resident of Kāinga Ora – Homes and Communities’ Maitland St complex in Dunedin, he was one of 26 tenants told in 2018 by his Tenancy Manager, Maria, that the complex was earmarked for extensive renovations.

“Maria knows I stress a bit,” he said. “It was a stressful time for my neighbours as well and the best thing we can do is help each other.”

“You’ve got a lot of memories and you also accumulate a lot of stuff over the years. I’ve got DVDs, CDs and books … you’ve got all that to – not worry about – but just sort of think about.”

What Peter didn’t initially know, however, was that his move would be just across the courtyard. With work completed on the first of two Maitland St buildings this week, Peter and his neighbours will soon move to the newly renovated building so the same work can be carried out on their former homes.

“I’m looking forward to being in my new home … they’ve made a really good job of them,” he said.

“Our current building has served its purpose, it’s beyond its use-by date and when you see the other building – now that it’s been renovated – they’ve certainly done a great job.”

Built in the late 1960s, the ‘star block’ apartments at Maitland St are a part of social housing history in New Zealand. The style of apartment was built across the country as moves were made towards medium-density housing.

Maitland St before and after the complex remediation work was completed

As they are Kāinga Ora’s only star blocks remaining in Dunedin, the decision was made to retain the heart of the building through a process used elsewhere in New Zealand but never before in the South Island – complex remediation.

“Complex remediation is where we keep the existing structure of a building but make serious improvements to all of its features,” said Lito Magadia, Kāinga Ora Senior Programme Manager.

“In the case of Maitland St, this means new roofing, insulation, double-glazing, bathroom and kitchen facilities, and a lot more,” he said.

With work completed on the first block and residents moving into their new homes, the second stage will start in March and will take about a year to complete. 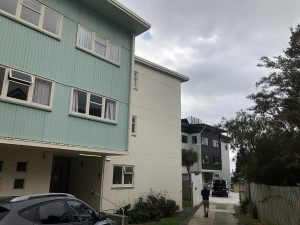 Work will soon begin on the front unit, pictured left, after residents move from there to their new homes in a couple weeks.

“We know how important it is we continue look at solutions to address housing issues in the south, and from as early as next month we have 15 new homes in the Dunedin area we expect to begin construction on,” he said.

“While overall numbers are subject to change for a range of reasons, those homes form part of a tranche of more than 60 units already at varying stages of planning and development in Dunedin and Mosgiel. The Public Housing Plan – released by Prime Minister Jacinda Ardern last week – also outlines between 150 and 250 more for the southern region of the South Island.

“As well as that, we need to ensure customers already in our properties have suitable warm, dry and safe places to call home, and that’s why I’m proud of the work so many have put in here at Maitland St.”