Porirua families will be in new homes before Christmas with the opening on 14 December of 29 new state homes at Kāinga Ora’s Castor Crescent development in Cannon’s Creek.

This year Kāinga Ora has delivered over 50 newly built state homes in eastern Porirua, which is part of the Porirua Development - a strategic urban regeneration project that Kāinga Ora is embarking on with Porirua City Council and Ngāti Toa Rangatira, the Regeneration Board (Te Pae) and the eastern Porirua community.

The project will deliver more and better quality state homes, and affordable market homes in eastern Porirua, while upgrading neighbourhood infrastructure and amenities. 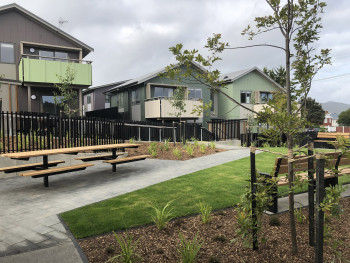 Will Pennington, Porirua Development Project Director says families will begin moving into the 29 houses soon, in time for them to have a new place to call home for Christmas.

"It’s really exciting, and encouraging to see the Castor Crescent development progress and provide warm, dry and healthy homes for whānau in this community.

"When it’s finished in February 2021 the Castor Crescent development will have provided 53 new homes, and this build illustrates how with good urban design we can deliver more homes on Kāinga Ora’s sites,’’ says Will.

"The site previously housed 27 ageing and earthquake prone state houses. Now we’re seeing the benefits of our building programme with the delivery of more homes. Our pipeline is accelerating with planning well underway for up to an additional 100 state and affordable houses to be built in eastern Porirua next year. I’d like to thank all our partners for their efforts so far in helping get more people into new homes.’’

Ground works on the Castor Crescent site commenced in March 2019 and the first 10 homes were opened in July 2020. All these homes meet 6 Homestar rating and have double glazing and are carpeted. The 29 homes opened today have a range of typologies including one, two, four and five bedroom homes.