Matty’s flat is comfortable and warm for her and her cat, Princess Nom Nom. But it’s also a workspace. She shares how the Kāinga Ora Accessibility Policy has made a difference for her.

Matty was getting sick. A damp and mouldy home was giving her infections and eventually led to hospitalisation with a condition affecting her gall bladder.

Then things became worse. While in hospital she was also diagnosed with a neurological disorder and had to begin to learn how to walk again. 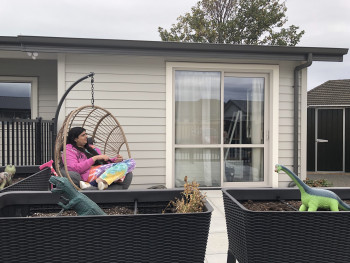 The thought of moving back to her old home, a flat up a staircase she would no longer be able to traverse, added to that stress. “There’s no point putting a very sick person in a sick house,” she said.

She was already on the Ministry of Social Development Housing Register, but in hospital things became more urgent. She updated her application and was given a higher priority rating, followed by a new home.

“A lot of friends made that happen and moved [my belongings] while I was on a hospital bed … when this place was set up enough I was able to be discharged here.”

That place is a brand new Kāinga Ora home in Christchurch, where she lives with 12-year-old cat Princess Nom Nom. The friends – many of whom she previously only knew through an active Twitter presence(external link) – rallied to fundraise to make the new house a home. Social workers pitched in and local charities helped to clear out her old home. Many belongings had to be thrown away due to the mould.

“They raised money and spent it on stuff so when I came home from hospital I wasn’t coming home to an empty house.

“I know not everyone is as lucky as I am in that respect, but I’m also glad I reached out. People were willing to help when I needed it.”

Along with recovering from her hospital treatment, Matty lives with autism and anxiety. That means regular visits from support and care workers who help her live independently. Open-plan living and a parking space made things easier for them, she said. 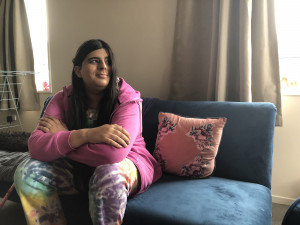 Matty wants to use her experience to increase awareness of the Kāinga Ora Accessibility Policy.

“That makes me very happy as well, that they’re comfortable working here. I think people forget that when you have a lot of disabilities and support, the house is also a workplace for a lot of people.”

Matty wanted to share her story to spread awareness of the Kāinga Ora accessibility policy, from which – among other work programmes – at least 15% of all new builds will meet universal design standards. All others will meet as many of those standards as possible.

Universal design is where a space is usable and accessible to people of diverse ages and abilities; it minimises hazards and risks of accidental or unintended action and incorporates sufficient size and space to accommodate a range of mobilities, body postures and sizes.

It also means homes like Matty’s are easily modified, should a resident’s needs change over time.

“I like to show, especially parents of young people with disabilities, that things are possible and there is support there … and that the community itself does want people like me in it, despite the feelings you sometimes get, and despite how hard it is sometimes to fight for things.”